Yesterday was a bank holiday in the UK.  Well I am in Mallorca so what did it mean to me.  Well it meant that I didn't have to get up and work online.  A relaxing day I thought?

The day started quietly enough.  Me and Freddy went for our walk and the sun was shining.  By lunch time Mick had got up and woken up enough to take us to the vets.  Today Freddy was due to have his annual vaccinations.  Last ones he will be having here in Alcudia.  We had decided to try the local vets and not the one Freddy was used to (20 minute drive away).  The reason for this is because when we leave we will need to take him for his worming tablet and amongst packing etc it will be easier if we can go local.

So popping off to Alcudia Town we walked into the vets (no appointment necessary).  After standing fidgeting for a while eventually someone from the shop (that the vet is attached to) came through and told us that the vet was on an emergency call and would be back in 15 minutes.

So off we went for a wander around.

But 15 minutes or so later we returned.  The vet was lovely, young and good looking (as they all are out here!) and even better he recognised what breed I thought Freddy was!  When asking me what breed I said that they put on his records that he was a Yorkie but he was too big, Mick said a Tibetan but he shook his head and said no 'Catalan Sheepdog'.  Hooray, that's what I had found before.  It is only logical really as they are quite common in Spain and it accounts for him always trying to herd us!

Anyway, jabs done, explanation done about returning to the UK and a promise to return 2 days before we leave and Freddy happily left the vets.  In fact, for once, he liked the male vet.

Next post tells the remainder of my chaotic day.

Oh and here are a couple of photos.  First one a Catalan Sheepdog from the internet and secondly our little Freddy.

You be the judge but I think their is some Catalan in him. 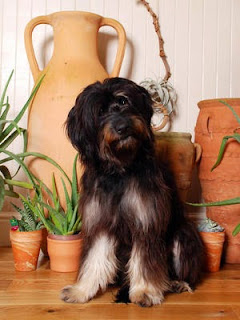 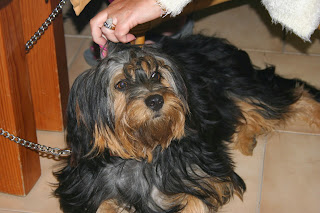 Today has been a difficult day.  We went for a coffee and sandwich at our friend's bar.  We haven't seen him since he closed at the end of October so he was unaware of what has been going on through the winter months.

Telling him we were returning to the UK was difficult and his reaction has made me feel awful.

In the midst of putting our house on the market and organising the return to the UK I forgot about those that we were leaving behind.  Why does it always have to be one or the other?

UK or Mallorca, family or friends?

I came 'home' feeling restless, confused and hoping that we were making the right decision.  I took Freddy out for a walk but it was too warm for him so I went back out again on my own.

I needed to walk and to think.  But it hasn't really solved anything  It is a no win situation.

We left the UK and our family to live our dream but the dream did not exist.  We are returning to the UK to be near family but I do hope we won't regret the decision.  The reality is that nowhere is perfect and whatever we choose we leave people we care about behind.

I don't want to go into great detail of why we decided to leave but I never realised what it was like to be a foreigner in someone else's country.  When on holiday you do not notice the little things that mount up and cause irritation and ill-ease.  But there is also Mallorca the country - the natural world.  I love the island, I love the wildlife, the mountains and the sea.

In the summer of 2012 we hid in the cabin on the ferry as we left Palma after our holiday because we didn't want to say goodbye.  Now we are choosing to leave.  Leave the island, the house we own, and the friends we have made and those we knew before.

I am grateful for the operation that has given me back my sight and the treatment of the Spanish Health Service although that also showed me how difficult it could be if you were to require hospital treatment for anything more serious.  The struggling to understand what was going on in a language not your own and a system that you do not know.  Then there is the fear of being left alone.  How would you cope when one of you ends up alone.  Bad enough in your own country with your family around but in a country which sleeps for half the year!

No, a decision had to be made and it had to be made while we were still fit enough to make the move back and while I was still working and able to afford to do it.

It is a sad and very difficult day ...

Today I have a brighter outlook on life - in more ways than one!
My operation on Thursday has produced brilliant eyesight in my right eye.  Life is looking brighter and everything is almost in 3D.  I just hadn't realised how bad my sight was until I have it back again.  Brilliant, marvellous, fantastic.  Thank you Clinica Salva and Dr Diego Richards.  The op was over with in 7 minutes.  In fact the doctor timed it from the moment he started until he said 'all finished'.
Since then we have had a family come to view our house.  In fact they returned again yesterday without the estate agent as the older daughter had not seen our house.  In fact they love it and the mother can't wait to speak to the estate agent tomorrow with a view to putting in an offer.  Depends of course on what the offer is!
So everything is looking up.
The sun is shining, the sky is blue and I am feeling so much more positive!
at 09:44:00 No comments:

Bank Holiday in UK gives me a day off

Today is a bank holiday in the UK and as I work for a UK employer that means a day off for me too.  Here in Alcudia work continues as normal for everyone else.

So far today I have prepared a calendar solely for the purpose of ticking off all the pre-op and post-opp instructions and medications that I have to do.  I'm sure my mum didn't do that for her op but hey I'm used to creating agendas/schedules of events etc.

Always have been a list maker, it is a way of getting all those thoughts from my brain down on paper and allowing my brain to relax. (some chance, I never switch off).

Holidays were a list makers dream.  There was the route to take care of as we drove here and back.  Then there was the schedules for trains/ferry/road etc.  Add to that the list of items being taken in suitcases and flight bags and then in latter years (when driving) items for on the journey in the car including kettles, stove and food.

When we moved out here my To Do list was enormous with all the reminders for selling our house, relocating and then finding a new home.  Gradually the list got shorter as the items got completed.

Now I'm doing it all over again!!  Am I totally mad?

But first comes my eye op and my calendar of drops before, drops after, dos and don't s!

For those that have followed my blog you will recall at one point during the ups and downs I said that as long as the ups were in favour of Mallorca then everything would be ok.  If the balance shifted then we would need to rethink our situation.

Well the scales have shifted and so have our feelings for this beautiful island.  Don't get me wrong, the island is still beautiful but family and the UK calls to us!

Trying to recall the trigger that created the shift is hard to pinpoint.  Was it the visit of my daughter and the grandchildren, was it her subsequent breakdown of marriage, or was it my Mum thinking that she would never see me again?

Or was it the heat of last summer where we spent almost all the time shut indoors with windows and doors closed and air con on, with swollen fingers and feet?

Or was it the lying in bed unable to sleep and coughing because of the air con?

Perhaps it was the sudden progression of the cataract forming in my eye and the necessity of an operation.

Was it the electric going off when one too many appliances were on?

Was it our lack of being able to learn enough Spanish to sound anything more than like a child?

Or the realisation that one day one of us would end up alone.  Would we want to be alone in a foreign country or would we prefer to be on familiar territory in the same country as our family.

Maybe the truth of the matter is that Mallorca, island of our dreams, is just purely a dream.  The reality is quite different and one that could have ended differently when we were younger and when we had more confidence and less caution.

Still, been there done that.  No wondering what if anymore.

So here we are again then - déjà vu - now we have the worry of trying to find a purchaser for our house in a country where it takes longer to sell, attempting to recoup the money we have lost by this experiment, wondering if we will have enough to ever buy a house in the UK and hoping that I can afford to pay to rent a house while everything else falls into place.

Oh and before all that I've got my eye operation next Thursday in a hospital that I don't know and by surgeons who I probably won't understand!

Here we go again with all the 'what-ifs' and worries.  Back where we started I guess but the difference this time being the country we start in.  But I'm getting ahead of myself here because I haven't explained what has occurred in the past year.

I know it is summer and my blog is showing snow.  But do you realise how much you miss snow when you live in a country that rarely gets it?

We did have snow on the mountains during the winter months but we never actually got close enough to touch it.

So with a revamped blog and my profile adjusted I will start with my blog again after an almost 2 year break!

For the next week my posts may be hit and miss as my eyesight is creating problems and I am due an operation next Thursday.  My failing eyesight in my right eye is not the cause of my change in plans but just another added reason to revert back to the familiar.

Still more of that another day.

It is time for my little dog, Freddy, to have his walk and the sun is shining and the sky is blue. 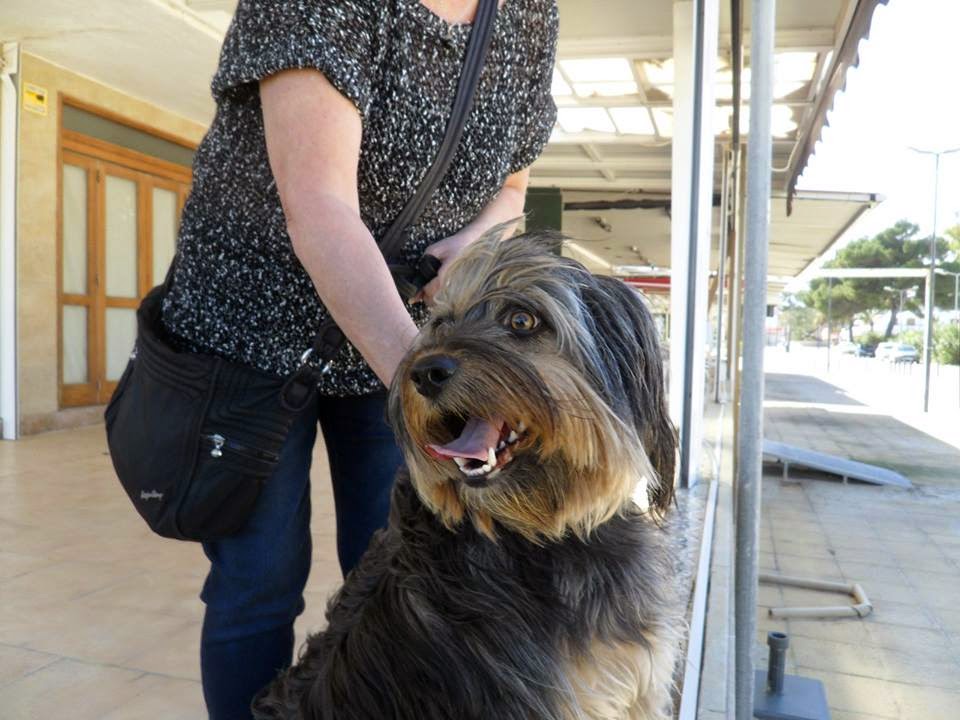