I love the look of the new Kindle.

Now I love books and anyone that knows me knows that I dream of having a library in my house! I just like the feel of real books.

However when I am travelling I always end up with carrying at least 5 books with me and I’ve often thought about having a Kindle so that I would have all the books I wanted in one place and with only one item to carry.

With the original Kindle the only problem I had was that it was a little bit big to carry in my handbag but the new Kindle has solved all those problems.

This new one is only 6 ounces in weight yet holds up to 1,400 books – and you can read it in bright sunlight! Brilliant that’s what I want.

It also has built-in Wi-Fi so if I think of something else I want to read while I’m away I can download it there and then.

Now the other evening we were suprised to find that a baby hedgehog was snuffling about in the garden trying to find something to eat under our bird feeders.

After a bit of searching I found out what hedgehogs liked to eat - after all there is not too long before they are due to hibernate - and have been putting food out for it in the hope that it will fatten up before its long sleep.

Hubby was wondering how it got in the garden as in recent years new fencing had been erected with concrete bases so the hedgehog couldn't get in via that route.  Apart from that there is the side gate but that only has about a half inch gap underneath.

Well today hubby found his route in by the telltale sign of a deposit to let us know it had been there!  Low and behold it was getting in under the gate.  Mick was most surprised that it had managed to squeeze under there and added that if I carried on feeding it then it was likely to get stuck.

After he disappeared outside for a while he returned announcing that he had made sure that the hedgehog wouldn't get stuck by chiseling off a bit more under the corner of the gate!

I couldn't believe it!

I just smiled and told him that he's as soft as me. 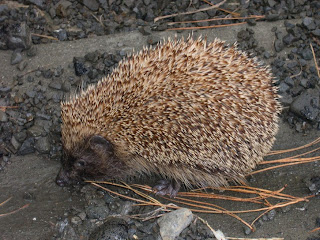