Well first thing tomorrow we say au revoir to our little piece of tranquility as we start our journey back home and return to the frantic pace of life that we call normality.

It has been relaxing, the people are friendly, the sun has been shining and we've probably eaten too much!

The Royal Wedding was fun to watch today and it was lovely to see something on the TV that was happy and brought people together.  It also kept me occupied when I otherwise would have been feeling a little sad.

Oh well back on the road again.

One of our neighbours - the Salamanders 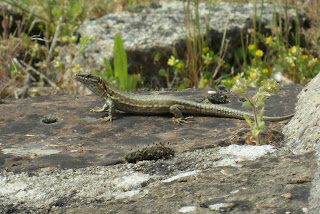 Must admit I am going to miss our neighbours, the Salamanders, who pop in to see us several times a day.  They appear to be quite brave and come quite close to you (until you move) and it is so funny watching them dashing around.

One has taken a liking to resting in the shade of our trailer and just popping out between the wheels when he wants to sunbathe.

Well Messi scored the goals for Barcelona and meanwhile me and Alejandro Sanz were commenting on the match on Twitter!

For a brief moment there I felt like we were having a conversation.

Here we are in the middle of a field (campsite) in the Limousin watching Real Madrid v Barcelona!

Well went to Oradour today, like we promised ourselves, and wished we had visited it last year.  I don't wish to go into the details on this blog about what occurred at Oradour on 10th June 1944 (Google it if you wish to find out more) but if you are visiting this area of the Limousin you must pay a visit to this memorial site where time has stood still and the village remains as it was when it was destroyed and almost all the inhabitants lost their lives.

I did take many more photos but I put a few here as I pay my respect also.  It needs no commentary. 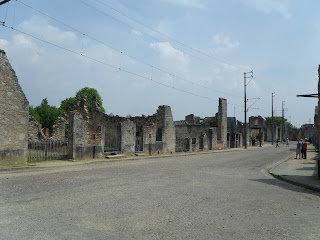 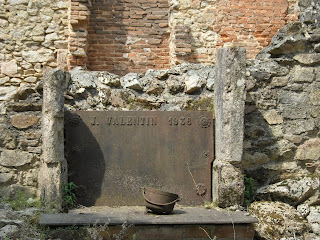 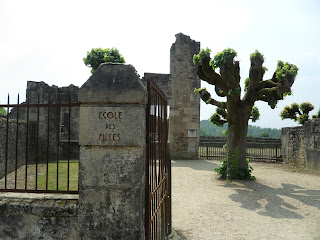 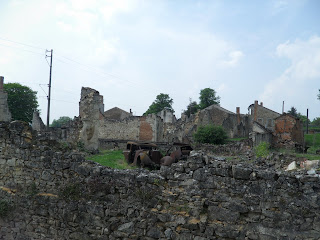 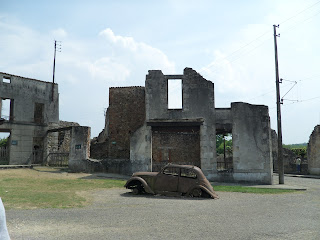 Just a few photos for now to show you how lovely it is here in the Limousin. 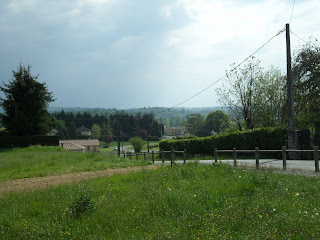 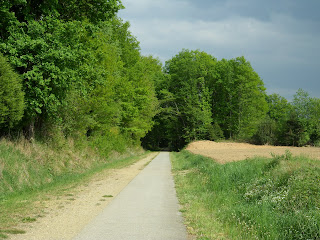 This is an old railway track 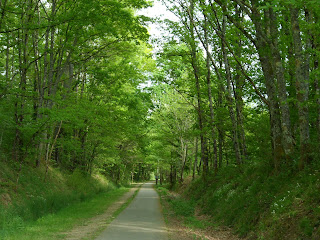 Getting further along the track 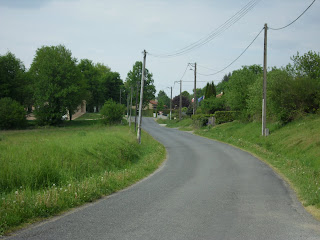 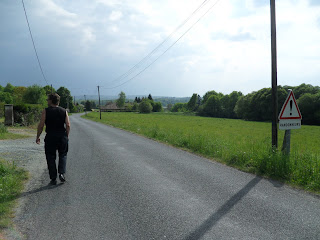 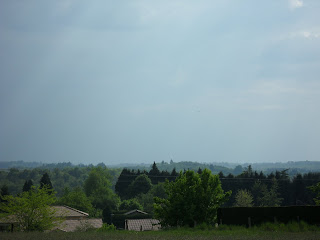 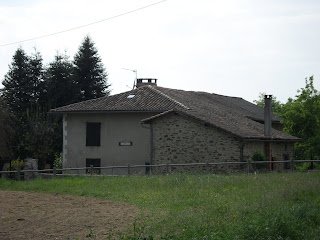 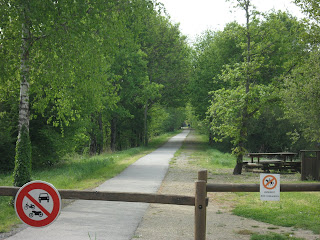 More of the railway track 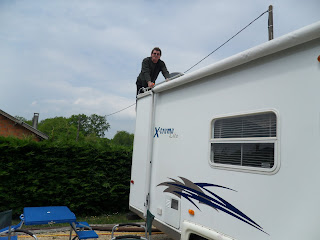 Mick setting up the satellite dish 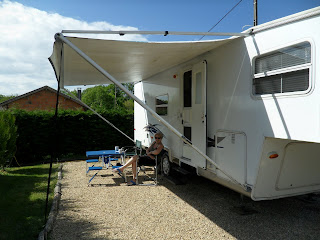 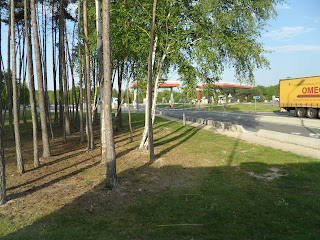 This was the services we stopped at overnight on the way here at Salbris
at 11:13:00 No comments:

Well brilliant drive down here.  Found a new route we can use when en route to Spain in June.

The weather is fantastic 33C today.  My body is wondering what on earth has happened - suddenly plunged into summer temperatures.

Last night before arriving on site we found a lovely services to park up and there were no problems.  Good nights sleep and as we had made good time coming down we had a lie in too!

Wi-fi up and running and got a great pitch next to the chickens and cockerels - Just as well we love wildlife lol.

Cockerels crowing; crickets chirping (or whatever they do); cuckoos cuckoo-ing and a beautiful blue sky.

To all our Spanish friends making their way back home to see family and friends we say 'Felices Pascuas'.


Sad to say we could not join them this year but who knows what next year or the year after may bring.

The countdown to Easter has being going on for a few weeks now and we've been watching the build up to the celebrations and parades on TVE.

I would say from an outsiders point of view that Easter is celebrated more than we celebrate Christmas!

So not long now. Have a fun and relaxing time in preparation for the summer months ahead when you will all be rushed off your feet.

Well this has been a busy weekend as the countdown to Easter begins.

To start with I decided to try a different hair colour than normal and it has come out darker than I expected (see profile picture) but I am gradually getting used to it and hey it's about time I had a change!

I've been loading up the trailer and organising all the documents etc that are needed for a week away and I think I've remembered everything.

I have to admit to really looking forward to some peace and quiet and time to catch up on some of those things that never seem to get done (finishing a course or two perhaps?)  I might even get time to read a book!

I did not realise how tired I have been getting until last night after only a couple of drinks at home my eyes just would not stay open any longer and I fell asleep as soon as my head hit the pillow.

Mick has planned a new route to try to get down to the South West of France and after one night out we should arrive on site by about lunchtime on Good Friday.  There is wi-fi on site and with our trusty satellite dish we should be able to watch the Royal wedding.  I wonder if they will be celebrating it on the campsite.

I still have 3 more days at work which I know are going to be flat out in an effort to try and get as much completed before I take my holiday but I'm not superwoman and I can only do what will fit into those 3 days.

Wednesday night will be the last chance for having a bath and washing my hair before we arrive on site and then we are off bright and early Thursday morning.

Well time is nearly here to get my upgrade.  But this time I'm really confused as there are so many new phones available.

So far I've tried the Samsung Omnia, iPhone 3G, Android HTC Desire and numerous others before that and no one phone seems to have everything that I need in the one place (or phone)!

So let us do a summary of what I've found so far...

The Omnia was the first touchscreen that I had tried and boy was it a pain.  Having to use a little stylus to click on the screen was frustrating and it was either that or your fingernail.  However it was a step up from the Nokia N95 and when going back to the Nokia I kept finding that I would tap the screen while forgetting that it didn't have a touchscreen.

The iphone has great apps but the signal strength is atrocious and I spent more time with "no signal" than I did with a signal!  Also you can't use a micro SD card to store all the music on.

The HTC Desire is the best so far but the apps aren't that good and the touchscreen keyboard isn't that good.

So what else is on offer:

iPhone 4
Nokia N8
or the newcomers

Now the Windows phones would appear to be a no-no as they only have internal memory (up to 16Gb) and do not allow external SD cards.  Shame I rather fancied something different.

However both the Nokia and the Sony have excellent cameras - with Nokia coming out on top with that one.

I know a phone will never be a 'camera' but bearing in mind I always have my phone with me but not always my camera it would be nice to have one that took a fairly decent photo.

I thought I had found a pretty decent HTC newcomer (Focus) but then found out they were only releasing it in Canada!

It's a shame you can't go in a shop and give them all a bit of a try first as they are such expensive items to make a mistake on - even if you can sell the rejects on eBay :-)
at 22:10:00 No comments:

Well almost!  It is Friday evening and I've finished the working week, so for me the weekend starts here.

The weather is brilliant and I'm hoping for a busy but fun weekend.  Tomorrow we are off to take the Indiana cake to Stefan for his birthday; then on Sunday we are off to deliver Easter eggs (early I know but we are away at Easter) and are going to see baby Sophie for the first time.

In-between all that I want to start sorting out the fifth wheeler.  I need to check what food we have in the cupboards, start loading up the freezer and make the bed so that it is fully aired.

Mick had his first treatment at the chiropractor today and it seems to have helped.  He informed Mick that at the moment he has one leg slightly longer than the other proving the point that his hip is out of alignment due to the problem with his spine.  He reckons that he can fix it within about four treatments - so we will see - but at least it has given Mick some hope.

I'm also going to get the pilates machine back out of the loft and show Mick how to exercise on it as it protects your back while building up the core muscles.