Well the forecast snow did in fact turn up as predicted.

As usual some parts of the country got it worse than others and here in North-West Kent we had about 4 to 5 inches.  It’s not too bad and the fact that it has fallen on a Sunday is even better.  Here are a couple of pictures. 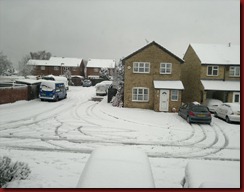 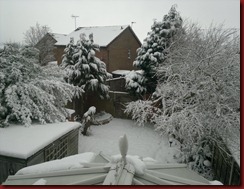 There is no snow forecast for tonight and apart from freezing temperatures overnight leading to slippery surfaces tomorrow I would think that there should be no problems getting to work in the morning.

It was fairly amusing watching the birds this morning as they attempted to get the snow off the bird feeder.  The technique was to cling to the bird feeder with their claws and flap their wings frantically until the snow fell off.  One Magpie did have a surprise though as it landed beside a piece of bread and disappeared under the snow.  It flew away pretty quickly!  However a blackbird made use of the dent in the snow that the Magpie had made and quite contently stood in it to eat the bread.

Still wherever you are keep warm and keep safe.